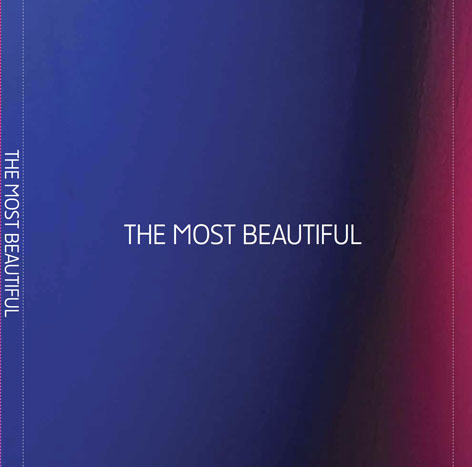 A fully illustrated description of the luminaria built from 1990 to 2012 is found in the book ‘The Most Beautiful’, published by Alan Parkinson in 2013. 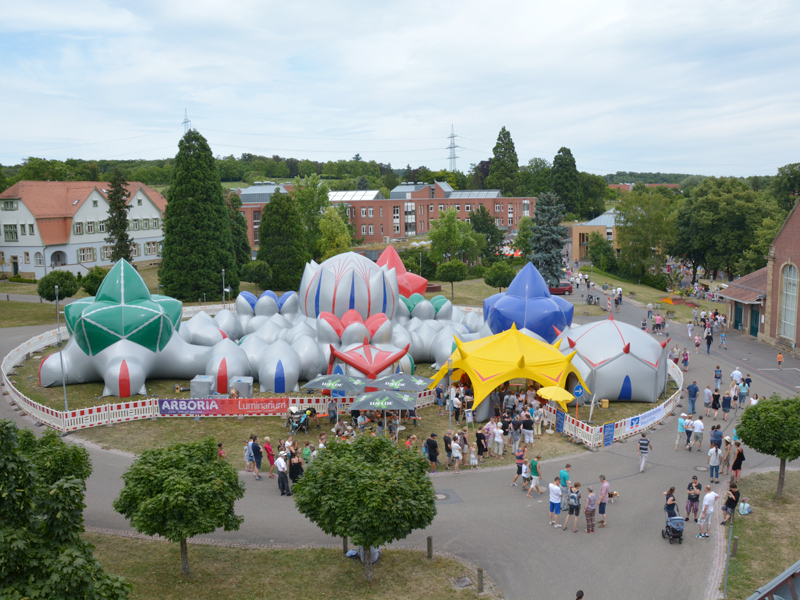 Arboria is dedicated to the theme of ‘trees’. Each outer dome bears its own stylised leaf motif rendered in graphic simplicity to fit the underlying shape of a stellated dodecahedron. Triangulating the main dome the visitor will encounter three tree-like structures where cones and spheres combine to create a brightly luminous tree trunk and branches that reach over their head. The Main Dome takes its inspiration from the Chapter House of York Minster and one can see an interpretation of the original tall Gothic windows and the arching columns that culminate in radiant rib vaulting. Arboria’s sound is of the Ecuadorian Cloud Forest, recorded there for biodiversity monitoring by musician & soundscape ecologist, Alice Eldridge (ecila.org) 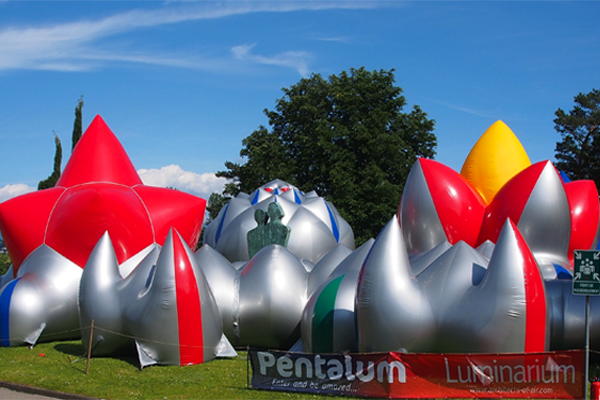 Pentalum is a celebration of the beauty of geometry and, in particular, of the pentagon and its derivatives. The luminaria have long used forms based on the Platonic solid, the dodecahedron, and the variants described by Archimedes. Alan Parkinson favours these forms for their unsettling asymmetry that complements the sense of losing oneself. The outer dodecahedral domes all have a seam motif based on the Schlegel diagram of a flattened dodecahedron, so that these domes become dodecahedrons within pentagons within dodecahedrons. A ‘tree’ occupies the centre space and, in keeping with the theme, the tree is also 5-sided instead of the usual six-sided trees of previous structures. An exception to the theme is the heptagonal Main Dome, which, in order to achieve more volume, has seven sides to sustain the desired asymmetry. This dome continues the research into the rendering of the muqarnas dome-like surfaces that are such a beautiful feature of Islamic architecture. 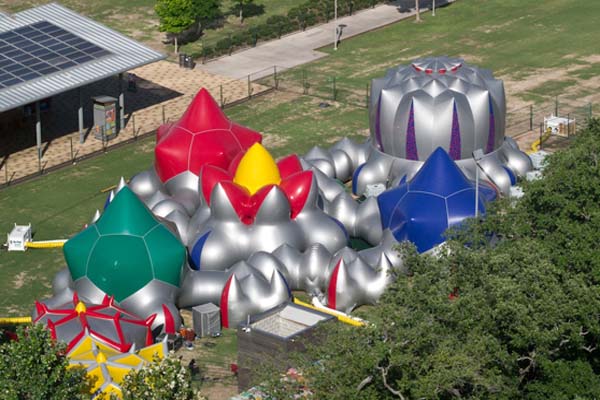 Built in 2012, the name acknowledges Eggopolis, Architects of Air’s first luminarium, the ‘gg’ of ‘Eggopolis’ having been replaced by ‘XX’ to refer to the 20th luminarium design and the 20th anniversary of the company. The principal dome – the ‘Cupola’ - was inspired by the circular space of the Chapter House of Southwell Minster.

In partnership with Lakeside Arts Centre local (Nottingham) community groups were enlisted in the ‘Windows Project’ workshops to make the intricate ‘stained glass’ windows of the Exxopolis Cupola based on a tiling design by Sir Roger Penrose. 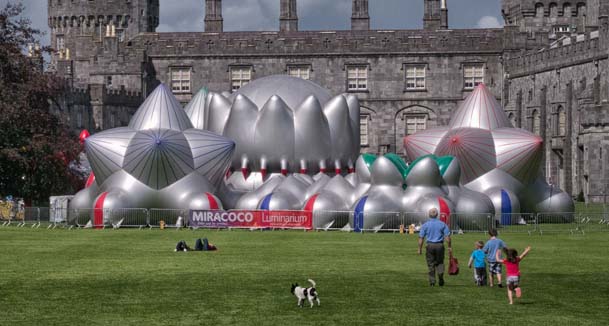 Miracoco closely resembles its sister structure Mirazozo in terms of the visitor’s journey and the disposition of its spaces. Its distinctive element is in the rendering of the domes. The dodecahedral domes follow a geometry made more precise by the increased use of reinforced restraints to define the structure. The working of the illuminated seams enhances the sense of structure. Miracoco’s Centre Dome is yet more voluminous than any previous dome we have built. It is a monumental structure, redolent of the Lotus Temple of India, that features spiral lattices to create a display of scintillating points of light on a field of iridescent hues. 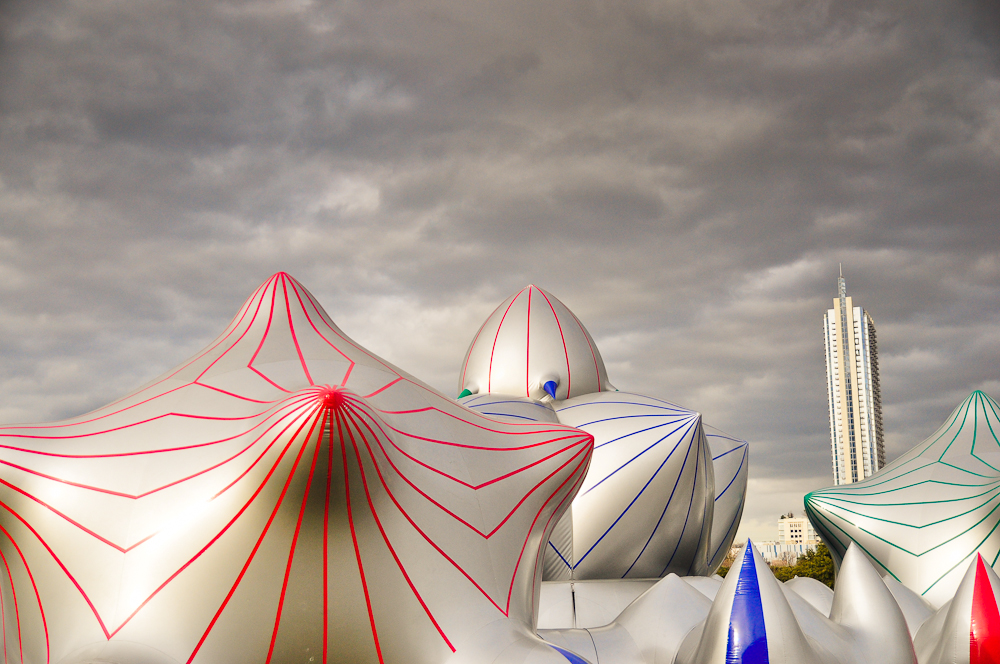 Mirazozo makes extensive use of an ‘illuminated seam’ - a feature where translucent strips replace the normal seams, creating a neon-like lattice of light. The illuminated seams foreground how the structure was formed and makes evident the underlying geometry.The pattern of these scintillating seams induce the viewer's gaze to shift between different perceptions of the same view – an effect one encounters in the contemplative geometric surface design of Islamic art and architecture. Mirazozo’s Centre Dome draws on the pneumatic principles of soap bubble intersection to calculate a voluminous overhead space. This structure, combined with a dazzling array of illuminated seams, has been compared to a firework display. 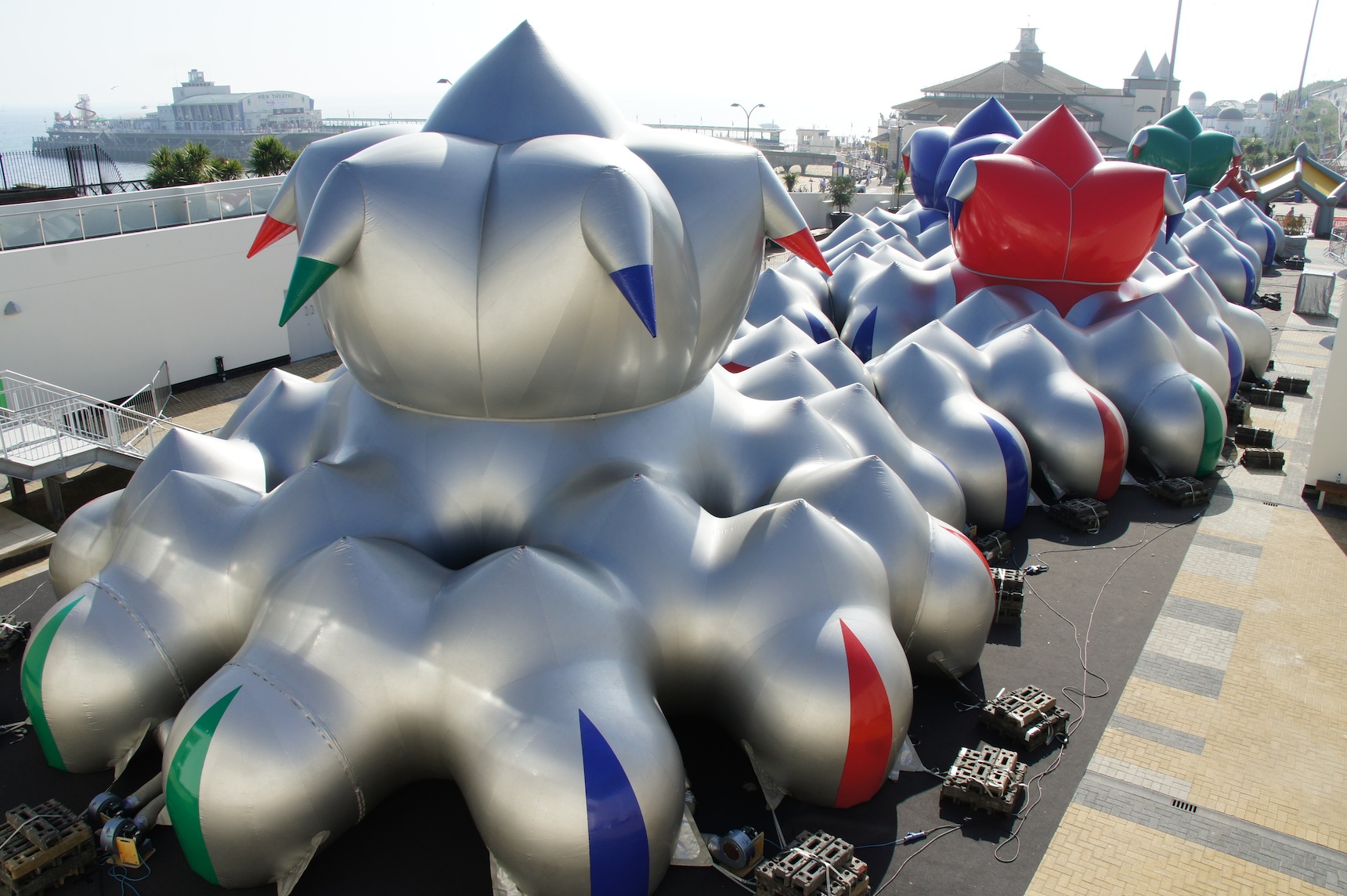 Amococo is the most labyrinthine of the luminaria. It features 86 triaxial domes and 71 pods that create an endlessly weaving complex of pathways where the visitors may happily lose themselves. Amococo is unique among all the luminaria in having all its domes conform to a hexagonal matrix. An architectural feature common to all its domes is the ‘oculus’ – an ovoid window set high on the domes. In the Main Dome this feature is translucent and allows indirect light to gently diffuse onto the cupola roof, which resonates with iridescent rainbow hues Amococo is the largest luminarium and has the potential to be set up in a very long narrow configuration approaching 80 metres (260 feet) in length.

Levity III shared an identical floor plan with Levity II but its domes were rendered differently. One of the principal features of Levity III were the ‘spikes’ on the centre dome which were conceived to strengthen the anchorage and to permit hot air to escape.  Every luminarium we have built has paid particular attention to ensuring the security and functionality of the anchorage.

A further exploration of the soap bubble principal, which dictates how spheres may join. It was commissioned and built for exhibition in the Dutch city of Enschede where it was designed to fit on the main square of Enschede as an annexe to the Levity II structure. It then formed a central element to the Triaxial structure and toured France, Switzerland and Spain.

Levity II emulated the floor plan of its successful predecessor, the original ‘Levity’. This floor plan had proved to be the most satisfying in terms of the length of the journey inside and the variety of experiences that are to be had en route.

The three outer domes were an exploration of an adapted dodecahedron and the ceiling of the Centre Chamber of Levity II was particularly beautiful - with translucent blue points in a swirling geometric pattern and indirect red light cast upward over the inner surface.

Triaxial was a simple structure built in response to an invitation from Lille, European Capital of Culture 2004.  It was based uniquely on triaxial domes scaled up from the Amozozo proportions to a size that has now become standard for the luminaria we have built subsequently.

Amozozo reacted to the large scale of Arcazaar and Ixilum, occupying half the ground area of Ixilum. Soon it became obvious we would need a larger structure and so the Tri-Dome was added - an experiment in the ‘soap bubble’ principal of pneumatic construction where three 5-metre diameter ‘bubbles’ were joined in line to create a large open space.  Here the seam pattern was foregrounded but in reverse fashion to the other domes - by making the seam the actual source of light.

Ixilum premiered in the Tivoli Gardens, Ljubljana, Slovenia where it was so popular the Mayor intervened to extend its stay. In Ixilum the triaxial dome generated over 440m. of tunnels.  Arcazaar had 72 such domes, Ixilum had 88. Ixilum took 5,000 hours of work to build, used over 6,000 individual pieces of plastic, 7,000 square metres of plastic, and 40km of seams were glued to put it all together.

Arcazaar premiered at the ‘Ten Centuries of Architecture’ exhibition held in Prague Castle and subsequently toured to South America. It was inspired by a visit to Iran where the undulating modularity of the Persian bazaar made a particular impression.  In Arcazaar those modular units took the form of a triaxial dome - essentially a three-sided dome that has the option to be open or closed on one or two of its three sides.  Stringing such domes together automatically created a winding path. Arcazaar had 62 such domes – each nearly 4m high.

Its lack of ornament made Levity the purest of the luminaria.   The inspiration for its name came when looking at the completed structure with all the different elements pointing upward.  Its lack of gravity (in the senses of both seriousness and heaviness) and the very notion of ‘lightness’ was aptly defined by ‘Levity’ for a structure that was all about the experience of light.

The three outer domes continued an exploration of the dodecahedron in the elaborate variant of the disdyakis triacontahedron. Here the seam lines acted as fluid map contours to define the shape.    The Centre Chamber was inspired by the jellyfish illustrations of 19th Century biologist Ernst Haeckel.

1500m2 of luminarium was built for the German holiday company TUI for a promotional tour of 28 cities in Germany. Its design incorporated thematic elements relating to the company’s prime holiday destinations.

Archipelago, as its name suggests, was designed to function as a string of linked autonomous islands.  The long meandering design was created specifically for the opening launch of the Canary Wharf station of London’s Jubilee Line. The outer domes used the truncated icosidodecahedron format with different patterned inlays. Archipelago had a central colonnaded dome whose roof was rendered as a form of muqarnas ceiling – a beautiful feature from Islamic architecture.

Commissioned by the South Bank Centre, London for installation on the roof of the Queen Elizabeth Hall.  Luminarium III was the first use of the word ‘luminarium’ as the generic noun for ‘inflatable structures on enters for an experience of light and colour’. This was also the first structure to use developments of polyhedra to create domes.  In particular it used the truncated icosidodecahedron because it allowed access at ground level. The polyhedron was not used in its pure state - but stellations and were imposed upon the regular geometry. Luminarium III went through some mutations (Luminariums IV & V), as pieces were replaced or new ones invented.

The second luminarium, was first exhibited in Calgary, Canada. It had overall dimensions 26m x 32m to 9.5 m in height and covered an area of 588m2.  Here the centre dome was made of opaque pvc and the interior roof of the dome was gently lit by the coloured light from the outer domes which filtered through the ‘flying buttresses’ that connected the centre dome to the translucent outer domes.  This structure also used elevated corner domes whose central lune again functioned as a window. The airlock had an external frame inspired by a concept of Frei Otto.

The first inflated sculpture publicly toured by Architects of Air.  It had maximum dimensions of 25m x 31m, rose to 8m in height and covered an area of 518m2. It was composed of series of domes connected by tubular passages.  This was the first structure to incorporate the anchored pod that gave stability to the tall domes. Also, through its central ‘lune’, the design gave the opportunity to have a ‘window’ shaped like the windows typical of Gothic cathedrals.  The centre dome of this structure used a motif from Islamic art – the ‘spiral of life’.